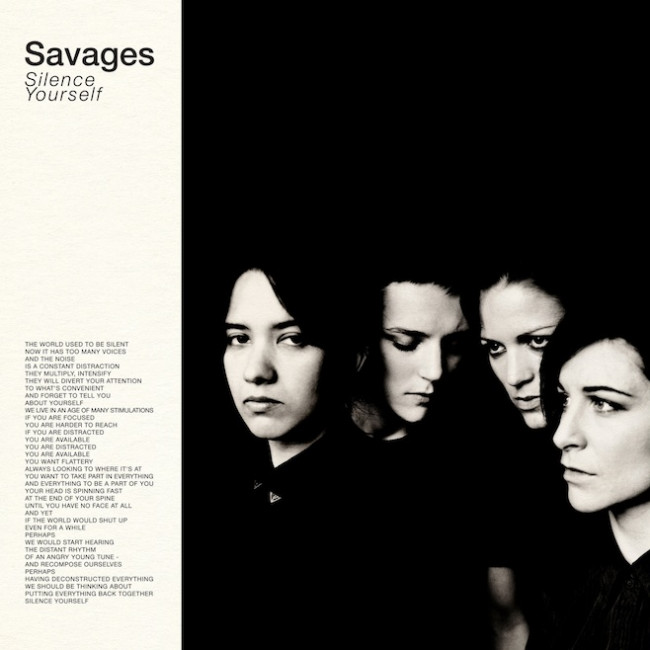 Every month’s a slow month in The Gap. And every mouth’s a hungry mouth.

1. Savages – Silence Yourself (Pop Noire/Matador) (see featured image)
Man, that band name’s a fucking misnomer, isn’t it? (Scott Creney)
2. Five Female-Fronted Rock Bands To Watch in 2013
I don’t seek the heaviest rockers or the baddest shredders. To me, that’s not what is rock’n’roll is about. Rock’n’roll is about laying it on the line. It’s about attitude. It’s about tradition. It’s about rule-breaking. It’s about rhythm. It’s about chaos. It’s about passion, kicks, hate, love, fear, joy, fun. (Erika Meyer)
3. Ten misconceptions about Collapse Board and Savages
Ten misconceptions about Collapse Board and Savages. Number one: that we care if they’re manufactured. (Everett True)
4. Savages | the three-word review + REVIEWED IN PICTURES
Savages. They aren’t. (ET)
5.This blog kills fascists.
The way The Smiths once covered their sleeves in 60s references, the way Wu-Tang Clan embraced the language and iconography of Shaolin, the way Oasis loved The Beatles, that’s the relationship Iceage has with xenophobia and white supremacy — it may not be the window, but it’s damn sure the drapes. (SC)
6. Kula Shaker – K (Sony)
The London dreamers have borrowed their favourite parts from music’s past to create a headrush of love and mysticism. (Wallace Wylie)
7. Playing Fair
I would never treat my guitar like I treat my boyfriends. It means more to me than that. (Dayna Evans)
8. Secret Memo Regarding Nirvana’s ‘In Utero’ Reissue Leaked
Our job is to retell the story, to reinforce the legends, to emphasise the inflexibility of the narrative. (WW)
9. A letter from a Nirvana fan
“It is raining heavily in Utrecht, Netherlands, 1:55 AM, a dark and dreary night filled with feedback and grungy slippery guitar overtones wailing from my imagination into my eardrums. I’ve been listening to Leadbelly, Half Japanese and Nirvana. A few minutes ago I finished your 2005 book on that little band from Olympia or Aberdeen or wherever. A million miles away from me, in any case.” (ET)
10. Screaming Match @ The Primitive Room, Spring Hill, 26.04.13
Music fills a need. Occasionally, I need to see folk being themselves – selves that I like – to remind me of what I’m not. (ET)